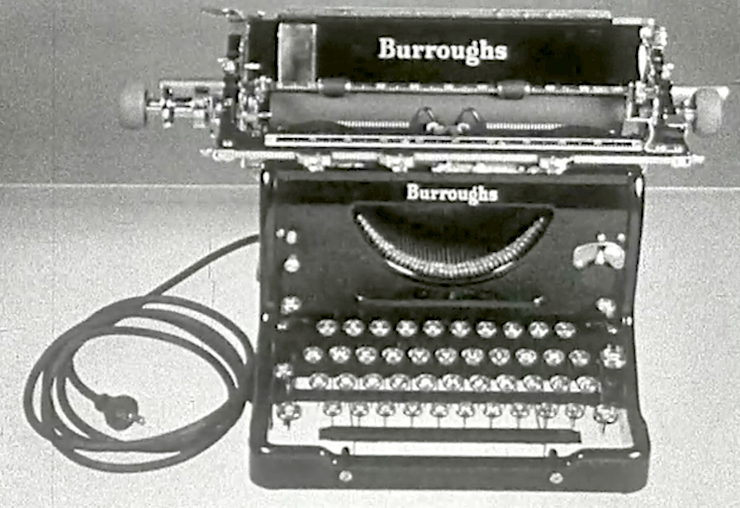 In “Gibson’s Typewriter,” Scott Bukatman writes about the irony that William Gibson’s cyberpunk novel Neuromancer was composed on a manual typewriter. Distinguishing himself from the postmodernists who have declared the end of history, Bukatman argues that “The discourse around surrounding (and containing) electronic technology is somewhat surprisingly prefigured by the earlier technodiscourse of the machine age.” To explore the “tropes that tie cyberculture to its historical forebears,” Bukatman says that he wants to reinstate the history of the typewriter “in order to type history back into Neuromancer.”

Typing history back into Neuromancer turns out to be quite a challenge because as Bukatman says, “The repression of the typewriter’s historical significance in the Neuromancer anecdote has its analogue in the annals of technological history. No serious academic investigation of the typewriter has been published, to my knowledge, and almost all curious writers seem to rely upon the same two texts: The Typewriter and the Men Who Made It (hmmm . . .) and, even better, The Wonderful Writing Machine (wow!), both highly positivist texts from the 1950s.”

I started out interested and sympathetic to Bukatman’s aims. He is a gifted writer who skillfully pulls apart and teases out the meaning of the 1950s texts. I had the impression that I was reading the “truest” version of the history of the typewriter that was available at the time Bukatman was writing. I was curious, though, about other histories of the typewriter that might have been published after this piece was written.

After some research I was surprised to learn that there are quite a few histories of the typewriter, almost all of which were published well before Bukatman’s essay. See the Smithsonian’s bibliography of the typewriter and Google Books (related books links). A number of these were written by collectors or have illustrations targeted to collectors; but several are more serious, with Michael H. Adler’s The Writing Machine widely regarded as the most accurate. Despite Bukatman’s claim at the time of his writing that there weren’t academic books about the history of the typewriter, one of the two histories he cites, The Typewriter and the Men Who Made It, was written by a professor at Urbana, published by the University of Illinois Press, and reviewed in a journal of the Organization of American Historians. Another example from academia is George Nichols Engler’s dissertation, The Typewriter Industry: The Impact of a Significant Technological Revolution (1969).

Am I simply being pedantic by pointing this out?  I don’t think so. Bukatman, Professor of Art and Art History at Stanford, declares that his task is “reinstating history,” and the recitation of that history comprises about a third of the essay. Calling the lack of authoritative histories a “repression” and claiming an analogy to the “repression” of the anecdote about Gibson’s manual typewriter in cyberculture is central to the structure of his argument. And, through his fluent analysis of the texts he has chosen, he seems to present himself as an authority who has culled the best that is available.

The feeling that I am left with as a reader is of being misled by the writer (however inadvertently), and that, to borrow Bukatman’s phrase, the “disappearance [of history] was little more than a trope of a postmodern text.”